Oscar Murillo: On being glocal

Crossing from the extreme West to the extreme South of London is not that easy. On my way to South London Gallery, I remember the allegory of going South. Going far and hence, constructing easy meanings for popular apprehension. Who are those who live there? How do they live? Similarly, when artists, writers, and media representations look  south, that generally results in stereotype, mystification, and Orientalism. “If I was to draw a line, this journey started approximately 400 km north of the Equator”, that was the name of the exhibition I was going to see. This is also the title of the giant installation by Oscar Murillo, located at the gallery’s ground floor. It is the first major solo show of the 27 years old Colombian artist in the UK.

Murillo has a short, but exciting career. Born in a small town in Colombia, he was taken to London at age 10. In London he graduated and post-graduated in Arts and since then his career has risen at fast pace. In arts circuits, he has been present in important individuals or collective shows, especially in Europe and the United States. In a quick online search, we find him talking with globetrotter curators and part of large galleries’ set of artists. He has pieces for sale at Gagosian. “A new Basquiat?” some critics have asked.

At least in his installation in Camberwell, he recreates his home environment with perfection. The sort of chaos that entails an artist that is from a place and from everywhere, we read. That sort of uncontested diversity appears on the fabric which he choses to cover the walls. We find products labels from around the world, especially from his native Colombia (funny coconut water labels are self-explanatory). Labels in different languages, designs and formats mean globalization. They serve to the same purposes, but not necessarily the same people. If they don’t serve the same consumers, why not disrupt their appearance? Aesthetically, they can get some local customization. Maybe look cheaper, be part of some assemblage, receive other colors and shapes, a tropical look-and-feel. 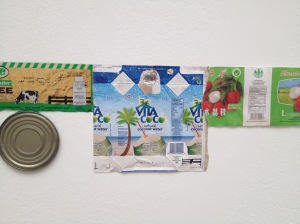 The visitor literally steps onto the installation. “All happens on the ground”, Murillo says. In fact, I walk over a dirty canvas, something that sticks up in shoes. Seeds, bottle caps, and some unshaped organic masses: globalization really stinks. The scenario includes tables with finished and unfinished paintings. No labels or explanation are ground. For a moment, all this mess feels like an “anti-exhibition”, where nothing seems for the visitor, but the visitor must prepare to read and feel what is happening here. A big party that ended a week ago. Interestingly, the artist really held a party at the opening, with lots of Colombian food and guests.

In a 2012 residence in Rubell Family Collection Museum in Miami, Murillo repeated something similar. Settling down over the gallery space for some weeks, he produced large-scale paintings, for which he gave very particular names, as “Chorizo”. The cultural crossroads where the artist stands fits his narrative.  Even when he gets paid for the commercial use of his work, he refers to something very intimate, as he declared in an interview given last year to The Art Newspaper: “I was invited by Comme de Garçons to do a campaign for their new season. They used five images of previous paintings of mine and gave me £10,000. Their clothes are quite expensive and I could have bought a new wardrobe, but instead I invited members of my family to go to Dover Street Market in Mayfair, London, and attempted to buy some of these clothes, which are targeted at a certain kind of audience. My mother is not exactly a weight stone. The trip became a cultural clash that I wanted to do something with”. Artistically, this talk translates into his mother wearing some fancy sunglasses for the campaign.

In some sense, Oscar Murillo works with a strong definition of his current identity as he contrasts it with present globalization issues. Actually, these arguments seem also fit an accent of a decades-old South and Central American art. People like Brazilians Jac Leirner or Marepe have equally crossed the same issues through their personal objects and experience, attaching to it a bit of performance. The latter, for instance, had transported a whole wall from his hometown into the exhibition room at 27th São Paulo Biennial.

Living in East London, Murillo mentions the total mix of far-away cultures living inside the same British atmosphere. I would add that this is about how people live together, but also, in a certain way, how they don’t mix to each other. The challenge proposed by this “studio-installation” is probably the opposite: not only bring together the local and the global, but in making the both split, on being “glocal”, whatever that means for you.

Here at the South London Gallery, the visitor will be able to watch a “behind-the-scenes” video and then see the amazing efforts the artist makes to build this cross-cultural chaos. According to him, the scenario was thought in such a way that he could feel like home. If being or not being glocal means reading the world from the ultra-controlled, under surveillance, and expensive London versus from the under-developed, poverty-striken world remains an interesting discussion. Murillo sets out his own aesthetics by creating other fetishistic, almost brutal fashion. Probably this is the proper way with which art can respond to historical, violent, and inexorable cultural imperialism and stereotype industry. By creating its own cycle of perversity and victimization.